A downloadable game for Windows

'The Ganzfeld Experiments' is a blind, turn based, logic multiplayer game where two or more players are thrown in a completely pitch black arena. It's every player for themselves, and the last man standing wins.

Winning: The point of the game is to scan the arena with your psychic abilities, locate the opposing player and move exactly on their position to defeat them. Timing is key. Also, do avoid stepping on the mines.

Fair warning: this is a logic and timing game. The game is easy to learn but tricky to master. It is best played with a math paper (the one with squares) and pencil nearby.

It very vaguely resembles battle ships, so that you can have a better idea of what it feels like.

- invite a friend, or more friends (if you have any)

- join or create an existing room, from the start menu

- if you're creating the room, specify the number of players required for the game to start, the size of the map, and the number of land mines.

- press join or start, whichever the case may be.

In order to follow the instructions below, you will need to have the screenshot on this page opened, as the guide references figures from there.

The game only has a screen filled with a solid color: dark gray or light gray. The game is turn based and, upon connection, all player's screens are light gray except the player whose turn it is.

On a math paper, mark a random line intersection as your player position, like you can see in Figure 1 in the screenshot.

You can initiate sweeping scans in all four directions, using the keys W A S D

Assume you are on the map with just one other player in it and nothing else. (Fig 3) In this situation, you can simply pinpoint where the other player is, by detecting the player once with a vertical sweeping scan and then a horizontal one. This will pinpoint the enemy player at position a-1 as you can see in fig 3.

Moving on to a slightly more complex scenario (Fig 4), it is you and two other objects on the map (marked with purple). Your screen will flash two times during a vertical scan and two times during a horizontal one, intersecting in a total of four points, indicating four possible positions the two objects could be in. As you can see, pinpointing objects' locations becomes harder, the more objects are in the scene. This brings us to the beam scanning ability.

Instead of using a sweeping line scan, Beam scanning is a more precise tool, albeit slightly more limited in its range.

Hold down the W,A,S or D key to move a beam scan point starting from your own position in any of the four directions, with a speed of 1 unit per second. The beam will scan one square at a time in the desired direction, flashing the screen as it passes an object.

Using beam scanning (Fig 5), you can then identify whether an object is at a certain sweep scanning intersection. In Fig 5, the player will beam scan once upwards along column 'a' and see that there is nothing at the intersection a-1. Then the player will scan downwards until they reach position a-2, their screen will flash and they will know something is there.

Moving works the same way as scanning. You hold down one of the W,A,S or D directional keys. Moving can only be done during the moving phase. Unlike scanning, you can only move once vertically (using W or S) and once horizontally (using A or D) per turn, so timing when you release the move keys is essential in landing you in your desired position. Once you have made one vertical movement and one horizontal movement (in any order), your turn automatically ends, and the next player's turn begins.

In Fig 6, the player moved 4 units to the left (they held down A for four seconds), then they released the A key, pressed down the S key, held it down for 2 seconds to land them 2 units lower.

After finishing a move, the turn automatically ends and the screen turns permanently light gray to signify the turn has ended.

From a strategic point of view, the movement in figure 6 isn't a good move. In figure 7 you can see how that move created two new sweep scan lines for the enemy player, alowing them on their turn to pinpoint us.

A slightly better move is the one in figure 8, where the player moves to the empty space (we know it's empty because in fig5 we used beam scanning to determine it is empty). This places the player at an already existing sweep scanning intersection, providing the enemy player with no new information to help them pinpoint us.

Movement is mandatory. If you haven't moved at all from your position during your turn, you will automatically die. This is to prevent players from standing in the same place and preventing the other player from having any chance of distinguishing you from a mine (mines never move).

Currently, all players and mines spawn inside the set map. However, players aren't prevented from moving outside the map. This will change in a future version.

In more than two players, if you landed on a player at the end of your turn, your screen will flash a few times to indicate you eliminated someone. If that happens, that person is out of the game, and the game continues with the remaining players.

The number of mines in the game is set by the room host. The mines are scattered throughout the map and register on your scans. Try not to land on them during your movement turn. It is safe however to pass through them and land somewhere past them.

A player's turn is composed of two phases:

After you are done with the scanning phase, you are ready to move on to Phase 2 of your turn: the Moving Phase. For this, press the M key. Your screen will quickly flash four times to signify you switched to the Move Phase

Movement was explained above. As soon as you finish moving (once horizontally and once vertically, in any order), your turn will end automatically

- You lose if you also haven't moved any spaces during your turn. You MUST move.

In multiplayer, the last man standing wins. This means killing a player won't net you a win unless you are the last person alive in the game. Otherwise, the game will continue until all but one player is left standing. 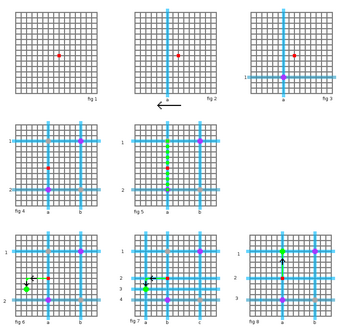